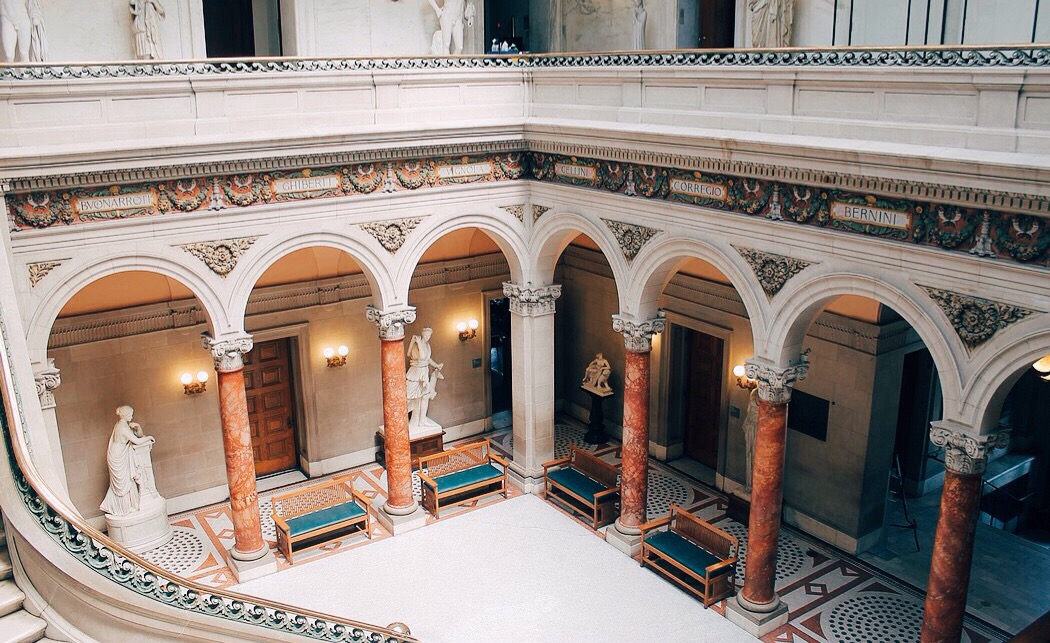 This post is not about the countless hours I spent scrolling through Tumblr at work.

I spent the last month working as a temp at the Maryland Institute College of Art (MICA). My official title was, “Director of First Impressions of MICA’s Office of Undergraduate Admissions.” Despite the somewhat fancy title, all I really did was greet prospective students and their families, schedule campus tours, and check my horoscope on a variety of different websites. But to my defense, by the time I began working there, the semester was concluding and current students were vacating the campus, so I really didn’t have much to do…But anyway, this post is not about the countless hours I spent scrolling through Tumblr at work. It’s about what I’ve learned during my time at MICA.

MICA definitely had a different energy surrounding it

As a resident of Baltimore for about 6 years, graduating from Johns Hopkins, and having worked at a few other universities in the area including Hopkins and Loyola University Maryland, MICA definitely had a different energy surrounding it. It was evident the moment I stepped onto the campus. I’m not really sure how to accurately put into words the vibes I was getting at the time but they were all GOOD. My first week there was the students’ last week of the semester and the week in which graduating students prepared to display their final art projects for MICA’s ArtWalk, a Baltimore event open to prominent artist around the country. So, for the most part everyone was shuffling around like zombies carrying around oblong shaped projects! Even though they were relatively quiet, the students’ (and staff’s) general demeanor came off as genuinely warm and welcoming. It felt good!

Like I do with almost every new job placement, I started my first week with my naturally afro-textured hair tucked away under a silky straight wig. Even though I personally feel that WEARING MY HAIR IN THE STYLE THAT IT NATURALLY GROWS OUT OF MY HEAD is professional, I do not live under a rock so I am well aware that certain employers deem it otherwise. So as per usual, I had to test the waters first. I did some recon, if you will. When I saw admission counselors with short dreadlocks and showing off arms full of tattoos I knew the coast was clear! My afro was on full display by the following week. In fact, I received too many compliments on it and it was coming from WHITE PEOPLE! Like, they genuinely loved it even to the point of complimenting the shape and texture of my afro. WHAT! I was definitely no longer at Hopkins.

“This is an art school. We are chill.”

Every time I expressed my shock about how well my hair was received, a co-worker would simply remind me, “This is an art school. We are chill.” Other instances like that further highlighted for me the key differences between my alma mater and “art schools.” From the conversations I’ve had with the people in that office I learned that the type of people that consider themselves artists have am inherently different way of thinking about society, people, communities, etc. They are more open and appreciative to different cultures and lifestyles. They are, for the most part, more WOKE. All of these aspects contribute to fundamentally different atmospheres from campus to campus.

Although like Hopkins and Loyola, MICA, too was a pwi, I didn’t feel the same way I did during my time at those two other schools as I did at MICA. That is, like an outcast. Uncomfortable. On edge. I’m really not trying to bash those other schools, I’m describing my experience. If you’re mad…stay…mad.

The people are terrible and the academics make you emotionally unstable

Again, knowing that I was an alum of the John Hopkins University, many of the students I worked closely with often asked, “How do you like MICA?” and “How was Hopkins?” I almost routinely responded with “Everyone’s really nice at MICA,” and “I loved Hopkins. The people are terrible and the academics make you emotionally unstable but I loved it.” But one student dared to ask, “What do Hopkins kids think about MICA? What stereotypes do you guys have for us?” I can’t even lie, I was initially at a lost for an answer! To my knowledge, many of us didn’t think about MICA. But I informed him truthfully stating that a good amount of the Hopkins student body generally saw all the neighboring universities as “Safety Schools,” that is, to put it nicely, “less academically challenging.”

With such an emphasis and focus on the hard sciences, many students at Hopkins looked down laughingly on people that actually pursue careers in the arts. Even the visual art courses offered at Hopkins were seen as jokes and as classes you took for fun or an easy ‘A.’ But contrary to the rest of our colleagues, my friends and I were very much intrigued by the arts. Personally, I was very into photography, drawing, and fashion. Not enough to make it my career though because to be honest, I thought ART IS SCARY! And working at MICA only confirmed my thoughts.

Listen, when I saw all the final projects those kids were cooked up and the enormous amount of detail that went into the…details! It was insane. I couldn’t fathom how some of those student even thought of the ideas for their project let alone actually execute them. Man, Hopkins was a piece of cake compared to some of the things I saw at MICA’s ArtWalk (I’m exaggerating…but only a very tiny bit). And many of the projects were just the stereotypical moody paintings about teenage angst. They were legitimate research projects! Some were even similar to what I’ve seen conducted by Johns Hopkins Bloomberg School of Public Health so, yeah, stereotypes=dismantled!